The Pride (of Mississippi)

When I arrived at work yesterday afternoon, I had one assignment: marching band practice at Southern Miss. As someone who never played in the marching band, I wasn’t quite sure what to expect, other than lots of music and possibly some marching.

I unknowingly arrived 45 minutes early, so I sat on an old bench and chatted with a few of the band members as we waited.

I always find the questions people ask me amusing because, more often than not, they think I’m a kid working for the student newspaper. (And I am totally OK with looking young as long as I continue to age slowly and gracefully and be confused for a 30-year-old at 40. Or something like that.) Did I ever play in the marching band? No, but I played the violin. Did I go to school at USM? No, I was an LSU Tiger. How in the world did I move to Hattiesburg after living in Baton Rouge? I got a job. And so on.

The sunshine came out of the clouds right before 3:30, and the band director made a quip about how it was practice time because of that. And then the music began, color guard girls commenced their practice, and so did the baton twirlers.

I was impressed by the sound and skill of everyone, and I spent nearly 45 minutes documenting their practice. I headed back to the office when dark clouds covered the sun and threatened me staying dry.

The following is one of my favorite images of the day: 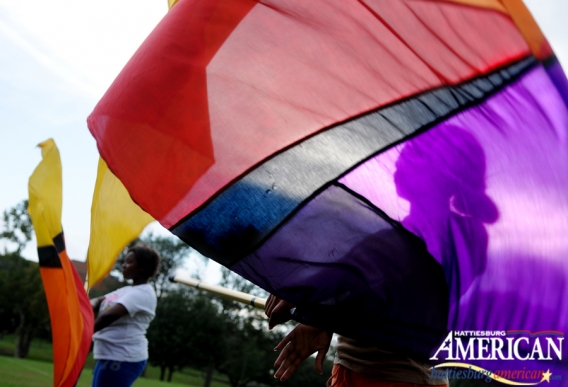 Alisha Hogan and other members of the color guard perform a routine Thursday afternoon during the Pride of Mississippi Marching Band practice at the University of Southern Mississippi. The marching band, which has been in existence since 1920, has 260 members and will be marching in next year's Macy's Thanksgiving Day Parade. (Photo by Erin Parker / The Hattiesburg American)

More images can be found at the Hattiesburg American Web site here.